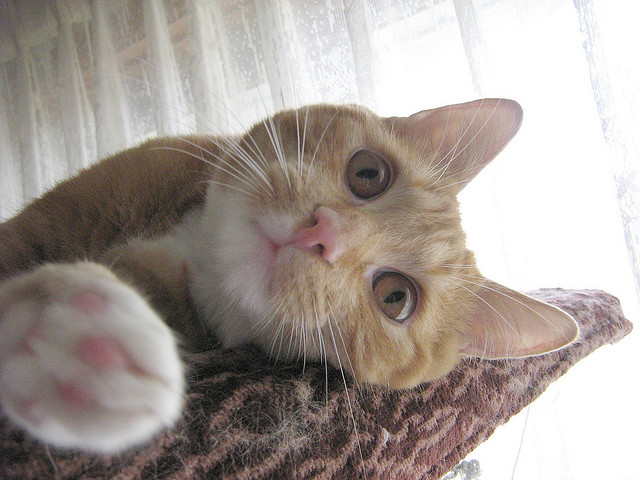 Energy Cat asks, "Why are oil companies still getting billions of dollars in subsidies from the U.S?" photo credit by Cat by denizen24 on flickr cc

5 Oil Executives appeared before the Senate Finance Committee to explain why they still want $2.1 billion/year subsidies from the U.S. government. This does not make sense since in 2005 when oil was $55/barrel, the oil executives said they did not need the subsidies anymore.

OK So now it is 2011 and oil is $100/barrel and gas at $4 to $4.50/gallon around the U.S. Oil profits are at an all time high. Why oh why do these oil guys need their subsidies which could be spent on education or to help people who really need it?

Maybe they are addicted to the subsidies like America is still addicted to oil. Why should we feed their addiction, wouldn’t that make us co-dependent?

Anyway, as Senator Jay Rockefeller said in the hearing,

“How much profit on a barrel of oil do you have to make to not be needful of these subsidies that we think you don’t need, but you say your life depends on?”

“At some point, you know, you wouldn’t need the subsidies. I think you’re there already, but you don’t. So at what point do you think that you don’t need these subsidies?”

Then Chevron’s Chief Executive, James Watson, tried to reframe the debate to make it sound like whatever the government is giving the oil companies, it isn’t a subsidy. Oh, really.

“As we described, we don’t receive subsidies, Senator. I don’t think the American people want shared sacrifice. I think they want shared prosperity.”

Wow, oh wowie, that statement is soooo full of kitty litter and Senator Rockefeller let this guy know he thought the statement was ridiculous when Rockefeller cut the oil guy off and said:

“Oh, that’s a lovely statement, but do you understand how out of touch that is? I think you’re out of touch–Deeply, profoundly out of touch, and deeply and profoundly committed to sharing nothing!”

Thank you Senator Jay Rockefeller. Now if only you could help Senator Orrin Hatch get his facts straight. Even though the oil companies are making sooo much profit since 2005 the more profits they receive the more jobs they cut.

As Rachel Maddow clearly pointed out on her recent program, oil companies are making record profits and not creating jobs. How much profit do they have to make to bring more jobs to American shores?

Senator Robert Menendez co-sponsored the bill that would repeal oil company subsidies and asked CEO Mr. James Mulva of ConocoPhillips if he was accusing Senators of being unamerican for questioning the oil companies insistence on continued subsidies. Menendez said that the oil companies are making $125 billion in profits this year and they can afford to receive $123 billion without the subsidies.