Posted on November 15, 2010 by kittyreporter 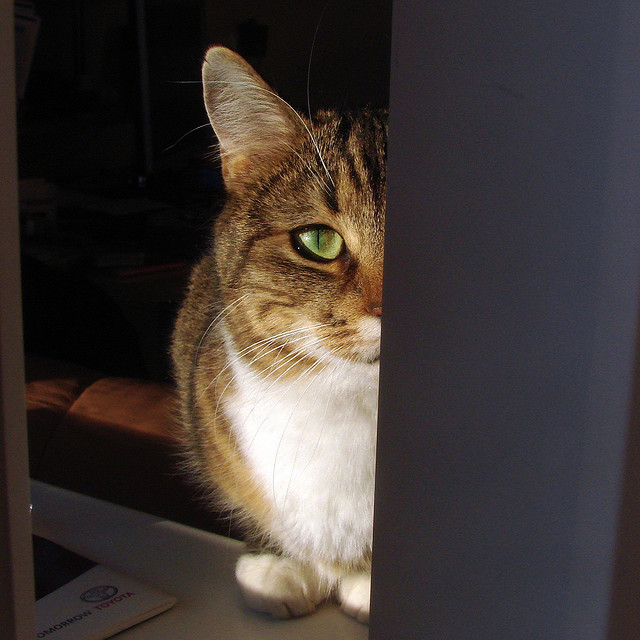 Spy Cat thinks Valerie Plame was a great CIA operative who protected the world from nukes. To bad her career was abruptly ended by the reckless abuse of power by people connected with Vice President Dick Cheney's office like Scooter Libby, Karl Rove, and others wishing to get back at her husband Ambassador Joe Wilson for speaking truth to power regarding no WMD in Iraq in 2003. Photo credit: Zhuzha - Spy Cat by Marcus Vegas flickr cc

Valerie Plame risked her life for her country for over 20 years while working for the CIA as a covert counter-proliferation operative. She moved throughout the middle east as a non-official cover (NOC) following up leads to stop terrorists from acquiring nuclear materials. What makes this movie so compelling is that it is based on fact, not fiction.

However, what is very painful to watch are the parts of the film that reveal the CIA bureaucrats willing to throw Valerie Plame under the bus once she was outed. Was this because they were afraid for their own careers and lives? The deliberate outing of Valerie Plame was a horrible disgrace. Then to add insult to injury, her colleagues of many years refused to stand up to the political manipulators who put her and her family’s lives in jeopardy from that thoughtless and criminal act of revealing the identity of an undercover CIA agent.

Valerie Plame had multiple threats on her life after her true identity as a CIA operative became public. When she asked for protection from the CIA agency that she worked for 20 years, her superiors refused to send anyone to investigate the threats or to protect her. In addition to that, the Fox News negative media machine continued to attack her character and career as a covert counter-proliferation expert by insinuating that she was a low level person in the CIA, possibly a “secretary” who wasn’t good at her job. Robert Novak, the person who wrote the newspaper column that revealed her identity, continued to consistently talk about her as if her work was of no real significance. He was unapologetic about the damage he deliberately inflicted on her in order to run his story about the connection between Ambassador Joe Wilson and his CIA wife, Valerie Plame.

Director Doug Limon says he made the film “Fair Game” to reveal abuse of power by the Bush-Cheney White House.

The movie shows the types of harrowing situations Plame faced in order to protect the United States and the world from the proliferation of nuclear weapons.

What is totally revolting is that Karl Rove coined the phrase that Valerie Plame was “Fair Game” in a conversation with MSNBC’s Chris Matthews. That’s where the title of her book and movie came from. Yet, Karl Rove has not gone to jail for his role in outing and destroying the career of a CIA agent. Does that seem fair to you?

McClellan says Rove is lying about Plame, shoulda been fired

Matt Cooper Proves that Karl Rove is a liar

This movie will open your eyes to show how power can absolutely corrupt people. The key question is how do we prevent this type of abuse from happening again? And, will all the villains who destroyed the career of Valerie Plame ever be truly brought to justice? Remember that Valerie Plame is the real hero in this scenario. She was the person putting her life in danger day after day to make the world safe from nuclear threats. This is the person the Bush-Cheney administration targeted to take down because her husband poked a hole in the flimsy excuse used to go to war in Iraq by President Bush.

The accomplice to the massive abuse of power wielded by Vice President Dick Cheney and others in the G. W. Bush administration was Fox News and the pundits that maliciously attacked Joe Wilson and Valerie Plame. The problem is that these pundits continue to make efforts to destroy anyone who does not subscribe to their political or religious ideology. Another key question is how to help Americans to be better critical thinkers who can tell the difference between propaganda and truth in journalism.