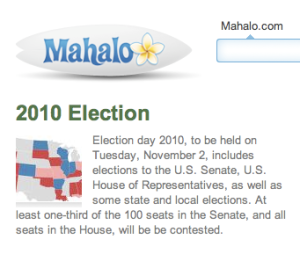 Are they all connected some how? Yes… Did you ever know Karl Rove not to be thinking of the next election? He plans ahead. Democrats could learn more about that.

Too bad Karl’s mind appears mostly to be on one  track. It’s the ends…the ends…the ends. The means, well, it seems Karl may care little about the moral consequences of that part. He’s so Machiavellian. I guess he’s proud of that and the Science of Dirty Tricks. Unfortunately, everyone loses in the end when it’s only about dirty tricks and getting elected at all costs.

My husband told me he’s tired of hearing about Karl Rove. Today he said I should refer to Rove as, “the one who shall not be mentioned–at least for 24 hours.” I’m not sure I can do it. You see, I think elections and Karl Rove are so interconnected that it is like velcro–very sticky.

Who is Being Obstructionist Now?  Are the Republicans going to just oppose everything that President Obama proposes because they are focused on 2010 and nothing else? Is that what you want from elected officials? Whatever happened to making this a better country for all people?

Fight back with positive action. Your action. Call your Congressmen and tell them you want meaningful health care reform. Stop the negative tactics perpetrated by Fox News. They want to divide this country and confuse people. Be aware of underhanded Dirty Tricks and educate your friends about them. Most of all, get involved. Remember, you can make a positive difference.

Karl hints about how he learned so much from his days in College Republicans.

I first learned about Rove and the now infamous Ozarks election where he eventually became chairman of the College Republicans from The New Yorker article  The Controller by Nicholas Lemann published May 12, 2003. In that article Rove kept changing the rules of the College Republicans election so he could win. Did “the one who shall not be mentioned” make a habit of changing the rules of elections throughout his career without informing the other side?

Even Karl refers to himself as “You-Know-Who” according to a recent article by Scott Horton in Harper’s Magazine.

Here’s a flashback into how Karl began his political career changing the rules of elections by his little ol’ self in 1973 when he ran for chairman of the College Republicans:

The national convention was in June, in the mountain resort of Lake of the Ozarks, Missouri. All through the late spring, Edgeworth and Dolan were hearing stories about the Rove forces staging credentials challenges at state and regional conventions, using some technical pretext. Shortly after the Midwest regional convention, for example, according to Edgeworth, the Rove forces, in order to justify the unseating of the Edgeworth delegates on procedural grounds, produced a version of the Midwestern College Republicans’ constitution which differed significantly from the constitution that the Edgeworth forces were using. The net result of all the challenges was that a number of states sent two competing delegates to Lake of the Ozarks, one pledged to Edgeworth, the other to Rove, each claiming to be legitimate. Then the meeting of the credentials committee, before the convention itself, turned into a donnybrook…

…During the summer of 1973, while Bush’s staff was conducting an inquiry into the Lake of the Ozarks affair, Terry Dolan, promoting the Edgeworth cause, leaked to the Washington Post a tape recording in which Rove and another College Republican are heard recounting at a training weekend some amusing stories about minor campaign espionage they had engaged in during various campaigns. The Post published a story about the tape under the headline “GOP PROBES OFFICIAL AS TEACHER OF TRICKS.”

…As if all this weren’t enough, people in politics love to speculate that Rove is up to much more than is apparent. In the same way that prophetic fundamentalists are always on the lookout for emblazonings of the number 666, the Mark of the Beast, in Washington everybody is highly attuned to the possibility that most of what goes on bears the Mark of Karl Rove. There are many cases where Rove is suspected of having engineered a brutal bit of political business without leaving any fingerprints, in the manner of the Lake of the Ozarks affair.

from “The Controller,” by Nicholas Lemann, May 2003, The New Yorker.

The Health Care Reform Factor in 2010

OK.  This is the chance for all Americans to finally have an effective, fair health care policy that provides quality health care at reasonable cost. What would the best Health Care Reform act include:

In order to achieve an effective Health Care Reform Act, President Obama needs to bring his message directly to the American people in a fireside chat similar to the fireside radio chats started by President Franklin D. Roosevelt in 1935. President Obama  should clearly explain the type of program he thinks would be best for all Americans through a TV chat and simultaneous internet broadcast.

President John F. Kennedy delivered a televised speech from Madison Square Garden in 1962 about the need for Health Care Reform in America. President Kennedy said that night why he was in New York City to give a major speech on the health care crisis in America and the important need to pass a Health Care Program in the United States:

“What we are now talking about doing, most of the countries of Europe did years ago!”

“The British did it 30 years ago and we are behind every country pretty nearly in Europe in this matter of medical care for our citizens.”

Karl Rove is worried.  He knows that if President Obama passes an effective Health Care Reform Act, Americans will be happy. That’s why an article in the Weekly Standard claims that Rove’s approach might be to:

“Scare the hell out of the Amerian people and run against the health care reform in 2010 and 2012.”

Rove is partly for Health Care Reform on the issues Republicans already agree on because their focus groups told them they would lose elections in 2010 if they weren’t for these things – like eliminating the pre-existing condition screen used by insurance companies to throw people off of their health care plans. However, the spin doctors on Fox and Rush Limbaugh are confusing our poor seniors scaring them into thinking the socialists will be taking over America if other changes are made.

When President Theodore Roosevelt passed Social Security in 1935 as part of the New Deal, some naysayers thought the sky was falling. Medicare was passed in 1965 under President Lyndon Johnson. Yet, we see misinformed seniors yelling at Town Hall Meetings, “Stay out of my Medicare.  I don’t want the government messing with my medicare!”  These poor people do not realize that Medicare is every bit a government program, and it allows seniors to have their own choice of doctors!

President John F. Kennedy gave a Special Message to Congress on National Health Needs on February 27, 1962.  In his concluding remarks he said:

Good health is a prerequisite to the enjoyment of “pursuit of happiness.” Whenever the miracles of modern medicine are beyond the reach of any group of Americans, for whatever reason–economic, geographic, occupational or other–we must find a way to meet their needs and fulfill their hopes. For one true measure of a nation is its success in fulfilling the promise of a better life for each of its members. Let this be the measure of our nation.

It’s time to stop the Dirty Tricks and provide truthful information to seniors and others about the benefits of Health Care Reform.

HEALTH CARE REFORM SONGS TO SING ALONG WITH